New Release: This new itinerary combines our classic 10-day Kimberley itinerary with a visit to the spectacular Rowley Shoals Marine Park and Ashmore Reef. Witness magnificent coastal vistas created by towering rock ridges, silent secluded gorges, abundant wildlife, and massive tidal movements. Expert guides interpret 40,000-year-old rock art, and retrace the history of Phillip Parker King who first charted this spectacular coastline 200 years ago. Board a Zodiac and touch the spray from the magnificent King George River and its towering 80-metre sandstone escarpments. Join an expert guide to learn about the history of the ancient Wandjina and Gwion Gwion rock paintings. Witness waterfalls cascading off Montgomery Reef as it rises out of the ocean on the ebbing tide, whilst discovering the reef’s diverse marine life. Finish off the voyage at a chain of coral atolls offering some of the best snorkelling and diving opportunities in the world. Their shallow lagoons are inhabited by myriad coral species and marine life, including giant potato cod, Maori wrasse, at least 233 species of coral and 688 species of fish – many of which are not found on other coral reefs. 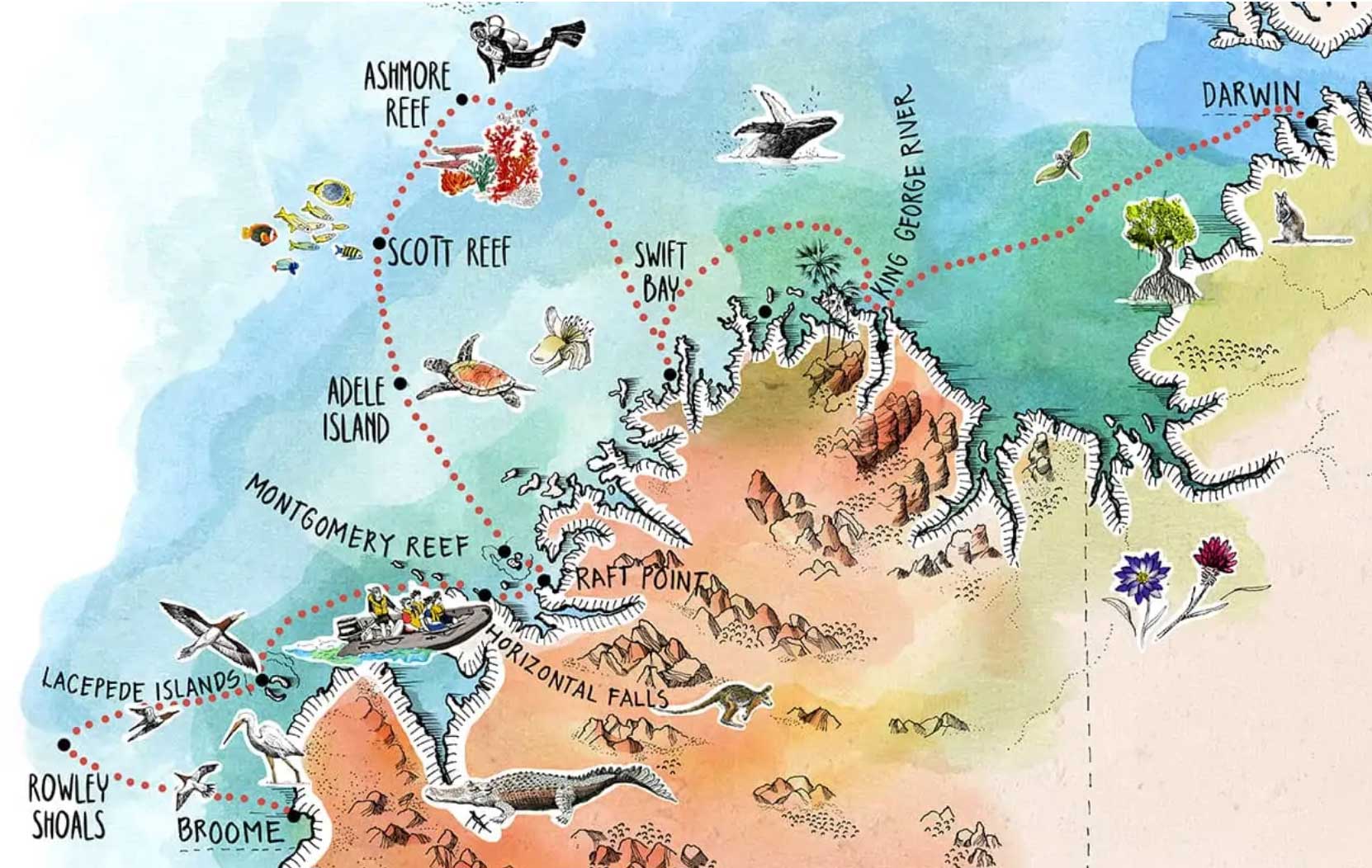 DAY 1: DEPART DARWIN
Board at 4pm where there is time to settle into your cabin before our 5pm departure. Take the time to become acquainted with all the facilities on board and join our Expedition Team in the lounge for an insightful introduction to the Kimberley. As dusk falls meet your fellow travellers, the Captain and crew for the Captain’s Welcome Drinks.

KING GEORGE RIVER
Cruise down the scenic King George River,  through steep-sided gorges carved by a flooded river system that carved a swathe through the Kimberley landscape 400 million years ago. We will take the opportunity to get up close and view the honeycomb erosion patterns of the 80m tall sandstone cliffs.

The ‘T’ shaped bay is composed of heavily fractured sandstone providing an abundance of rock shelters. On the walls of these shelters are examples of both Wandjina and Gwion Gwion style rock art.

ASHMORE REEF
The territory of Ashmore and Cartier Islands is made up of the West, Middle and East Islands of Ashmore Reef, as well as Cartier Island and the surrounding 12 nautical mile territorial sea. These islands are uninhabited, making them the perfect location for seabird breeding. Each year around 100,000 seabirds flock to the marine parks three tiny islands.

The reef here boasts a wide diversity of marine life, including over 70 fish species and 255 varieties of coral. To protect this reef, the Australia Government declared the Ashmore Reef National Nature Reserve in 1983. The islands also have a significant marine turtle nesting area and migratory bird populations.

Here we will spend time birdwatching, swimming and snorkelling the pristine reef.

Snorkel and dive the outer reef – The sheer walls and diverse ecosystems of this acclaimed coral habitat will take your breath away! Enjoy nature and history interpretations from your Expedition Team.

ADELE ISLAND
The remote and beautiful Adele Island is pristine, teeming with breeding bird and supported by coral reef that surrounds it. Declared a Nature Reserve in 2001, Adele Island is recognised for its bird breeding sanctuary, classified by BirdLife International as an Important Bird Area for its seabirds and waders.

Adele Reef is one of the more unique reef habitats on the planet, with exclusive discoveries reported in this area. This area is of great scientific interest as it provides an environmental link between the Kimberley’s oceanic and inshore reef systems.

MONTGOMERY REEF
Montgomery Reef is a biologically diverse area covering over 300 sq km and was named by Phillip Parker King. Twice daily, as the sea recedes in mammoth 11m tides, Montgomery Reef rises from the Indian Ocean in a cascade of rushing water revealing a flat-topped reef pockmarked with rock pools and rivulets.

As the reef emerges, we get up close in our Xplorer and Zodiac inflatable tenders to witness the spectacle as our Expedition Team share their knowledge on the formation of the reef and the myriad wildlife. Opportunistic birds take advantage of the emerging reef, feeding on marine life left exposed in rock pools. Turtles, dolphins, dugongs and sawfish too are also attracted to feeding opportunities as the ocean recedes.

The ocean is awash in a swirl of eddies and whirlpools as the moon’s gravitational force takes hold. Then, a few hours later the entire water-borne drama is reversed as the tide comes in and Montgomery Reef disappears below sea level.

DOUBTFUL BAY
Raft Point guards the entrance to Doubtful Bay, a vast body of sheltered water which harbours significant sites such as the ancient Wandjina rock art galleries located a short walk from the beach and are considered some of the finest in the Kimberley and we visit the rock art galleries when Traditional Owners are available to guide us. Doubtful Bay is the traditional country of the Worrora people who follow the Wandjina, their god, law-maker and creator. Images of Wandjina are found throughout the Kimberley, recording their stories, knowledge and culture in stone.

Red Cone Creek flows gently downstream until it meets the small but impressive Ruby Falls. Named by local mariner Capt. Chris Trucker after his daughter, Red Cone Creek is carved through rock formations stacked atop each other like building blocks. These rock walls are great for climbing and clambering over before reaching a series of freshwater swimming holes and waterfalls. The falls may be a gurgling torrent or a gentle trickle, depending on the time of the year.

We also aim to visit Steep Island while in Doubtful Bay.

The Horizontal Falls are created as the ocean thunders through a narrow gorge in the McLarty Ranges. Water builds up on one side and is forcibly pushed through the bottleneck, creating a rushing horizontal waterfall of swiftly flowing seawater. Riding the rapids on our Zodiac inflatable tenders is one of the highlights of our Kimberley expedition cruises.

Talbot Bay is at the heart of the Buccaneer Archipelago, where rocks on the 800 or so islands are estimated at over 2 billion years old. At Cyclone Creek, you will see evidence of massive geological forces in the impressive rock formations and cruise through the Iron Islands, past Koolan Island, before enjoying sunset drinks at Nares Point.

THE LACEPEDE ISLANDS
The Lacepede Islands are a protected class-A nature reserve and are significant as a seabird nesting rookery for brown boobies and roseate terns. Other species often sighted at the Lacepedes include Australian Pelicans, frigate birds, egrets and gulls. The four low-lying islands are also an important breeding and nesting habitat for green turtles.

If weather and tide conditions are suitable, we will explore the lagoons by Xplorer and Zodiac tender vessels.

ROWLEY SHOALS
At the edge of the continental shelf, 170 nautical miles offshore, lie the Rowley Shoals a chain of 3 coral atolls including Clerke, Mermaid and Imperieuse Reefs. The shoals, named by Captain Phillip Parker King, offer some of the best snorkelling and diving opportunities in the world. Their shallow lagoons are inhabited by myriad coral species and marine life, including giant potato cod, Maori wrasse, at least 233 species of coral and 688 species of fish – many of which are not found on other coral reefs. Diving along the outside edge of the shoals one can view colourful soft corals, hammerheads and pelagic fish. Water clarity here is absolutely unparalleled, making for superb underwater photography opportunities.

Conditions permitting, we will spend 1-2 days at Clerke and perhaps Imperieuse reefs, with ample time for snorkelling and diving opportunities. With each atoll covering approximately 90sq km, there will be plenty to see! Guided by our on-board marine biologist, snorkel away the day in the coral gardens of the Aquarium at Clerke Reef, or dive along the sheer vertical walls and through coral canyons. Try a drift snorkel in the channel, or beach comb on Bedwell Island, keeping an eye out for the red-tailed tropicbird that roosts there.

As our incredible adventures draw to a close, on our last evening aboard we enjoy the Captain’s farewell drinks amongst new-found friends.

ARRIVE IN BROOME
Our incredible adventure along the Kimberley Coast concludes in Broome this morning at 8:00am.  Bid farewell to new-found friends, the Captain and crew. A post-cruise transfer to Cable Beach, CBD hotel or Airport is included.

If you’re not transferring directly to the airport why not spend the day visiting world-famous Cable Beach or stroll the historic streets of Chinatown in central Broome.